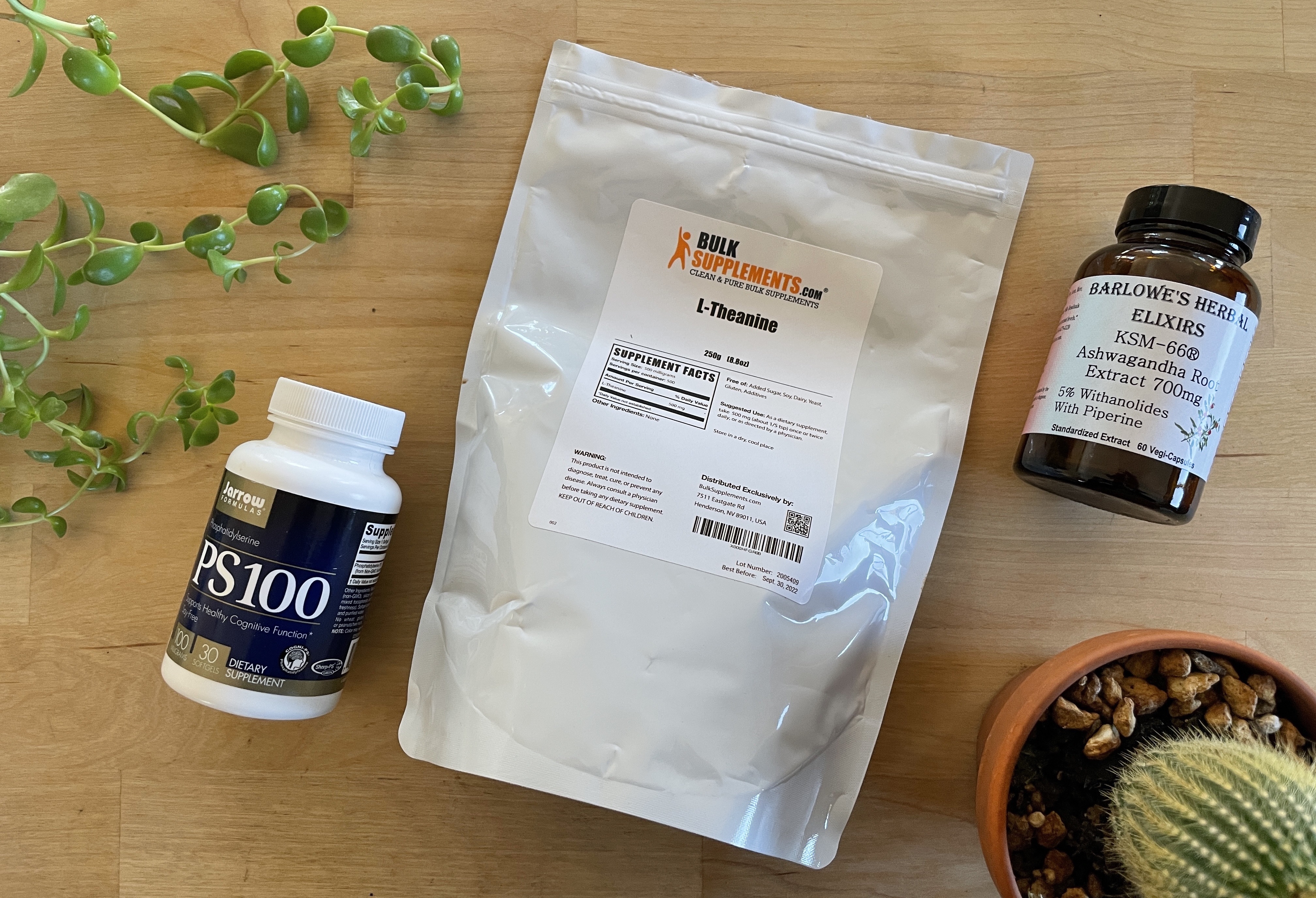 Tell me if you know this feeling:

It’s likely at the conclusion of a long and stressful day and though you’re physically tired, your mind is entirely too active and your body is holding too much tension. Unsurprisingly, you’re not able to relax or transition easily into sleep.

THAT is the feeling of persistently elevated cortisol, aka 'the stress hormone'.

In addition to making it difficult to relax, elevated cortisol also reduces sleep quality (further dysregulating cortisol, creating a vicious cycle). Thankfully, there are a number of good tools for reducing the impact of persistently elevated cortisol...

First, understanding why cortisol is important

Cortisol is a glucocorticoid hormone that is released primarily in response to stress or low blood sugar concentration. Looking at cortisol through an evolutionary lens, it’s the hormone primarily responsible for making energy available in response to a threat.

For most of our evolutionary history, if we experienced stress, there was a fair chance it was due to the looming threat of a tiger or bear hoping to make us a meal. Cortisol initiates the release of glucose into the blood (largely from the liver) which, in this prehistoric scenario, would be useful energy for the muscles as we attempt to run away from the tiger.

So as much as cortisol function in the body is an evolutionary vestige ill-adapted to modern human life, it’s also completely essential and without it we’d be dead.

What has humanity’s primary strategy been for dealing with the symptoms of elevated cortisol, for the last 9000 years or so? Alcohol, of course.

While alcohol is (obviously) very effective as a short term relaxant, it really just obscures the cortisol imbalance that sits at the neurohormonal heart of what drinkers are trying to address. Regular alcohol users see a durable increase in cortisol levels, meaning average stress levels actually increase. (This likely explains part of the dependency many people develop.) [1]

Cannabis is increasingly filling this end-of-day stress-reduction role for more people, but studies suggest it’s not much better, at least from the perspective of its effect on cortisol.

Several studies have shown that THC significantly increases cortisol levels. So while cannabis surely has relaxing properties via other mechanisms, like alcohol, it is only obscuring (and in this case, actually exacerbating) the underlying cortisol issue. [2]

Phosphatidylserine (PS) is a phospholipid produced by the body this is naturally highly concentrated in the brain and nervous system. Unsurprisingly given its prevalence in the brain, PS is involved in countless neurological processes, including modulating the activity of receptors, ion channels, enzymes and signaling molecules.

Two studies in particular have looked at the effects of PS supplementation on cortisol levels, both with positive results.

The first study used 600mg of PS per day for 10 days and had the participants follow a set workout regimen to standardize the level of exercise-induced stress. Average cortisol concentrations in response to stress were 35% lower when compared to the placebo group.

Also interesting was that PS increased the average testosterone-to-cortisol ratio 184% compared to the placebo group (all of the participants in this study were men). [3]

The second study included an even number of men and women, and had them use doses of 400mg, 600mg or 800mg once per day for 4 weeks.

L-theanine is a naturally-occurring amino acid found in a number of plants, most notably the tea plant (camellia sinensis).

L-theanine is structurally very similar to glutamate, the most abundant excitatory neurotransmitter in the brain. Owing to this structural similarity, L-theanine will bind to certain types of glutamate receptors, with relatively low affinity, however.

Still, this interaction with glutamate receptors is significant enough for L-Theanine to blunt some of the excitatory effect of glutamate. L-theanine has also been shown to increase levels of GABA in the brain, the primary inhibitory (relaxing) neurotransmitter.

A 2016 study looked specifically at the effects of L-theanine on cortisol levels. A dose of 200mg given only once, on the day of the experiment. Researchers then looked at serum cortisol levels at 1 hour and 3 hours after ingestion.

Ashwagandha is a root that has been used in Ayurvedic medicine for centuries, if not millennia, as an anxiolytic, anti-inflammatory, immunomodulator, antidepressant...to name just a few from an impressively long list of use cases.

Indian researchers - always eager to substantiate the claims of Ayurvedic medicine - have studied ashwagandha’s effects on dozens of conditions and metabolic processes…and an impressive number of them have shown statistically significant results in the direction that Ayurveda suggested.

Serum cortisol levels were measured on Day 1 and Day 60 and the ashwagandha group saw a 27.9% decrease over that period, on average, vs a 7.9% decrease for the placebo group. [6]

Recommendations: Dosage + How To Use

The first thing to note is that these three supplements will have varying levels of efficacy for different people, and finding the one(s) that work best for you requires some experimentation. I recommend trying them all to get a sense of which ones work best for your nervous system.

The second thing to consider here is that, in the interest of maintaining efficacy, it’s wise to cycle these supplements. If only one of the three works for you, a cycle of 2 weeks on followed by 1 week off is a good rhythm. If two or three of these supplements are effective for you, rotate them in one-to-two week intervals.

Phosphatidylserine Dosage - 400mg taken mid-day seems to be the sweet spot. I use Jarrow 100mg.

L-Theanine Dosage - A 200mg dose was used in the study, but many people (myself included) notice nothing at this dose.

L-Theanine is safe and very well tolerated at doses much higher than this, and I recommend using 1000mg-1500mg taken in the evening (ideally ~1hr before bed). The glutamate inhibition and the GABA elevation in addition to the cortisol buffering makes L-theanine the most relaxing of the three in my experience. I source this bulk L-theanine.

Ashwagandha Dosage - 600mg of KSM-66 extract per day was used in the study, and I find this dosage to be very effective when taken ~1hr before bed. I use Barlowe’s KSM-66.

An additional tip: Make it an evening latte - L-Theanine and KSM-66 are both powdered and lend themselves well to making a warm drink, which is another relaxing signal to the body that we can leverage.

I usually use 2-3oz of almond milk + 4-5oz of boiling water and a drop of honey in a Klean Kanteen with my L-Theanine or KSM-66 dose. Give it a shake and it’s a yummy, slightly frothy nightcap (a nightcap that actually addresses elevated cortisol).